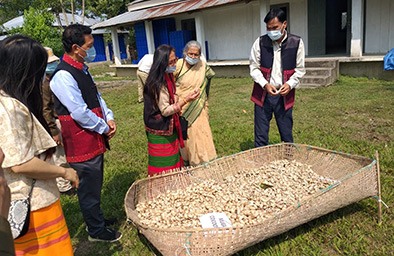 “Loin loom weaving is one of the oldest indigenous artisan skills, or more appropriately a legacy passed down, generation after generation, to the womenfolk of Arunachal Pradesh,” Misra said, adding that loin loom weaving “opens doors for every girl and woman to be self-empowered.”

Sharing her concern over the diminishing traditional weaving, Misra said that, due to the modern fashion trends and changing social norms, “loin loom weaving tradition is disappearing in our state,” and strongly advocated reviving the traditional loin loom.

Misra advised local women, particularly educated girls and working women, to “adopt the indigenous loin loom weaving art, craft and skill as a hobby to carry on the social tradition.”

Later, she visited the local garment industry, Elam Industry, started by retired IAF group captain Mohonto Panging. She said that the youths of the state should take inspiration from Panging and become entrepreneurs and provide jobs to others.

Misra also visited the Eri farm in Sille, 7 kms from Pasighat. She interacted with the officials, and advised them to impart training to the local entrepreneurs and youths. (Raj Bhavan)