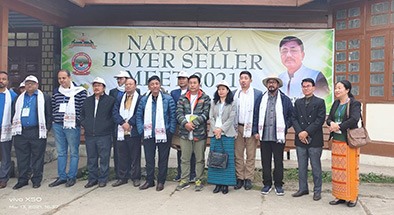 Its president Gyati Loder requested the agriculture minister to “push for transportation subsidy for the farmers of the state.”

He also requested for organizing exposure trips for the farmers to help them gain firsthand information on value addition, packaging, etc.

He was speaking at the National Buyer and Seller Meet, 2021, which is underway at Abotani Hall here in Lower Subansiri district.

Agriculture Minister Tage Taki exhorted the farmers (sellers) and the buyers to utilize the platform to exchange ideas and technical know-how.

“It is important that both the parties understand each other’s perspectives about production and marketing and create a balanced ecosystem,” the minister said, and urged experienced buyers to educate and guide the farmers about the demands in national and international markets.

Stating that self-reliance in food production is a sign of a self-reliant economy, he advised the farmers to take up composite farming, encompassing dairy, poultry, piggery, vegetable garden and fishery.

Informing about the government’s initiative on ease of doing business, Taki informed that all agriculture-based licences will be issued through a single-window operation.

“Further, the Arunachal Pradesh Agriculture Marketing Board’s (APAMB) rules are farmer-friendly. Farmers can use the board to secure market linkages,” he said.

“The department will definitely facilitate banking support for motivated individuals and farmers for technology interventions in farming sector,” the minister said.

He said that “by the end of 2023, I have a dream to supply kiwis to all over India and abroad. Why import from New Zealand when we have the potential?”

Agriculture Production Commissioner Rajeev Verma, who was also present, said “the opportunity is a win-win situation as the buyers are in direct contact with the

Arindom Hazarika, promoter of the social enterprise Bhoome, which is a platform that tries to help farmers get the best price for their produces, also shared his views on the expectations as a buyer.

Lambu Subu Beverages Pvt Ltd MD Tage Rita shared her experience in brewing the Naara Aba kiwi wine. Her kiwi wines have so far been showcased in international platforms in Shanghai and Greece.

Horticulture Director Jummar Rime exhorted the buyers from the neighbouring state and the sellers to use the opportunity to share ideas and technical know-how and share business opportunities.

The meet, which started on 11 March, is being organized by the district horticulture office, in collaboration with the APAMB.

It is worth mentioning here that Arunachal is the largest producer of kiwi in the country and Ziro in Lower Subansiri district is the highest kiwi producer in the state.

Lower Subansiri contributes 60 percent of the kiwis grown in Arunachal.