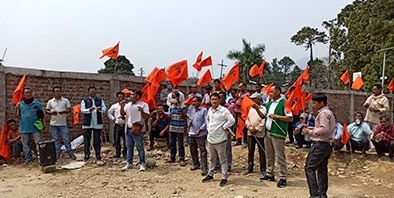 ITANAGAR, 19 Mar: The state unit of the Bharatiya Mazdoor Sangh (BMS) here staged a statewide protest against the central government on Friday to press its various demands.

The BMS is demanding that the pension amount be 50 percent of the last drawn salary; scrapping of the new pension scheme and restarting the old pension scheme; linking all types of pension with the DA cost of living index; providing better health scheme to all pensioners; commutation of pension to be revoked after 12 years instead of the present 15 years for all commuted pensioners; and social security pension and health schemes for sailors, ASHAs, anganwadi workers and GDS employees.

On state-related issues, the BMS demanded enhancement of contingency and casual workers’ wages upto Rs 18,000. It also demanded implementation of the

same grade to the same works charge, creation of a vice chairman’s post at the Arunachal Pradesh Building & Other Construction Workers Welfare Board (APB&OCWWB), establishment of an unorganized workers’ welfare board in the state, and regularization of APB&OCWWB employees.

It further demanded mandatory provision of safety tools for workers working in high-risk zones, such as workers of the power and the PHE departments, consideration of contingency/casual job appointment of a deceased’s family member, etc.

Addressing the rally at the tennis court here, state BMS general secretary Tadung Yangfo informed that the decision to stage the nationwide protest was taken during the Bihar and Chennai BMS national executive meetings.

Yangfo informed that the BMS had to stage the protest as the pensioners’ association had approached the BMS on the pension issue and the same was already submitted to Prime Minister Narendra Modi.

“We will continue in our movement until the government address our demands,” said Yangfo.

Similar protests were organized in various district headquarters by the BMS’ district units.