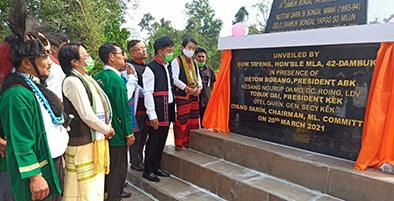 Muttum Darin was martyred in the Anglo-Abor War of 1894 while resisting the entry of armed British troops who were on the Abor Hill Expedition in Bongal Yapgo, presently located in Yapgo village.

The MLA said the war memorial should be preserved. She assured to provide assistance from her end to conserve the site and make it a tourist destination.

ABK president Getem Borang urged the state government to recognize the sacrifices of all the martyrs of the Anglo-Abor war of 1894.

A pamphlet titled ‘The Martyr’ was jointly released by the MLA, the DC and the ABK president. (DIPRO)