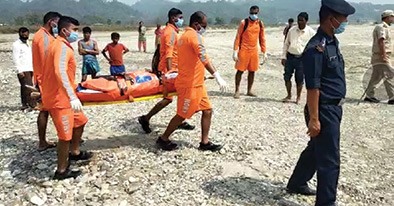 DOIMUKH, 22 Mar: The dead bodies of two men who drowned in the Pare river here on Sunday evening were recovered on Monday by the Papum Pare police and the NDRF.

The deceased have been identified as Rajat Chakroborty and Munim Kalita, both 25 years old and residents of Naharlagun. The Doimukh police have lodged an unnatural death case (No 2/21 under Section 174 CrPC).

Meanwhile, the Doimukh police are still trying to trace the body of a girl who drowned last Saturday in the Pare river, near the Hoj steel bridge.

Briefing the media about the drowning cases, Papum Pare SP Neelam Nega said both the youths were friends. “Rajat Chakroborty and Munim Kalita were together, partying. Around five in the evening, water was released by the NEEPCO authorities as usual. It seems the duo did not hear the warning siren,” said the SP.

Nega expressed serious concern over the growing cases of drowning in the Pare river.

“Mostly youths are losing lives due to drowning and we are very worried. Every evening, water is released from the NEEPCO hydel. The locals of the area are well aware and therefore do not venture out to the river. But outsiders don’t know and become victims,” the SP said.

He appealed to the NEEPCO authorities to carry out large-scale publicity to educate the people, and also made it clear that the present system of issuing warnings by blowing a siren is not enough.

“The siren system should be in place at all strategic places along the Pare river. Along with blowing of siren, a voice warning to the people to avoid the river should also be played. I will write to the NEEPCO authorities to look into it and bring out a solution,” Nega said.