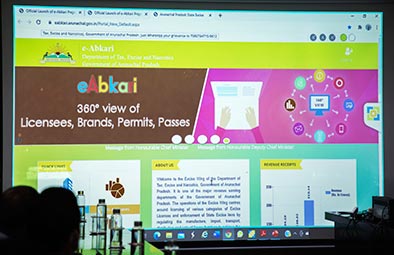 ITANAGAR, 31 Mar: Chief Minister Pema Khandu launched the e-Abkari portal of the Excise wing of the state department of Tax & Excise and Narcotics on Wednesday.

The online portal is the state government’s reform initiative leveraging state-of-the-art modern technology to carry out various activities of the Excise wing through e-Abkari, which will facilitate seamless online communication among all excise officials across the state, all licencees, administrative departments and other stakeholders.

This will be done through workflow based systems hosted in the state excise portal https://www.eabkari.arunachal.gov.in.

Congratulating the department on its new initiative in line with the government’s mission to digitalize governance, Khandu appreciated the National Informatics Center (NIC), Arunachal unit, which along with the West Bengal unit of NIC, created the portal based on the successful model of West Bengal, the first state in the country to start e-Abkari.

He expressed optimism that with the Excise department going online, transparency will ensure zero-leakage of revenue.

“This is a step forward towards e-governance that stands on our motto of ‘Reform, Perform and Transform’,” he observed.

Reiterating his commitment to provide transparent, inclusive and people-friendly governance to the people of the state, Khandu said, “We believe in less government and more governance.”

He, however, called upon the department to give top priority to training of its officials, especially those in the Excise wing who will be dealing with the portal. He requested the NIC to assist the department in capacity building of the officials.

“This is an ease of doing business initiative. Therefore, officials must be well-trained so that the objective is reached,” he said.

Deputy Chief Minister Chowna Mein, who is also the minister in-charge of Tax & Excise and Narcotics, said that the government aims to extensively use information technology in redressing citizens’ grievances through web-based applications.

“The main motive behind it is providing ease of doing business, bringing transparency and revenue augmentation by plugging any chance of revenue leakage. There has to be minimum human interface in the process with time bound services,” he said.

Mein further informed that in phase-1 of the project, import and transport permit modules will be implemented. The beneficiaries of the project would be licensees, department and citizen.

To mark its beginning, the chief minister handed over the first transport permit to one of the private firms importing packaged liquor generated on the spot from the e-Abkari portal.

The e-Abkari will have various modules which will be rolled out in a phased manner. Among them, licencee tracking, brand management, licence issue, permit/pass issue, establishment mapping, enforcement monitoring, excise stock inventory management, treasury integration are the important features.

Complete rollout of the project will have lasting impact on collection of excise revenue by checking revenue leakages, monitoring of activities of individual licencee, bottling units, distilleries and breweries on real time basis will be done.

Tracking of movement of all excisable items, timely and prompt service delivery as well as checking the sale of illegal and spurious products which are hazardous for human health and safety will be done in the process.

The launching ceremony was also attended by Advisor to Minister Tax & Excise and Narcotics Nyamar Karbak, the chief secretary, officials of the department and NIC representatives. Deputy Director General NIC and Excise Commissioner of West Bengal too joined the launch virtually from Delhi and Kolkata, respectively. (CM’s PR Cell)