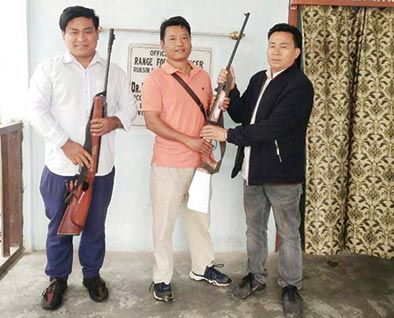 PASIGHAT, 1 Apr: The ongoing ‘airgun surrender abhiyan’ initiated by the state government is gaining positive response in East Siang district as 123 persons have deposited their airguns at different forest range offices under the Pasighat forest (T) division till date.

Divisional Forest Officer (DFO) Tasi Mize informed that his department with the help of local gaon burahs and panchayat leaders conducted a weeklong campaign covering all the villages in the district and mobilized local villagers to give up their airguns.

It may be recalled that Environment & Forests Minister

The DFO issued an order, urging the people to surrender their airguns and stop killing wild animals. He observed that airguns are mostly used for hunting birds and small animals like oriental squirrels.

Forest officials said that the airguns deposited at the forest offices would be displayed before the forest minister, who is expected to visit Pasighat on 3 April.

“We are receiving positive responses from the denizens, who are willingly laying down their airguns. We are expecting that more than 200 holders will give up their airguns till 3 April,” the officials said.

DFO of Daying Ering Wildlife Sanctuary, Tasang Taga opined that the government should impose a “blanket ban” on the use of airguns and sale of pellets as some people may not willingly surrender their airguns.

The airgun surrender campaign in the Ruksin range is being conducted by Deputy Ranger Opang Jamoh, while the campaign is being assisted by WTI consultant Biswajeet Tayeng in the Mebo range.

Meanwhile, the All Bogong Students’ Union (ABSU) of Pasighat has extended its support to the state government’s initiative to stop rampant killing of wild birds.

Assuring of all possible assistance to the forest department, the ABSU urged the forest minister to issue strict directives to the district administrations to deal with wildlife hunting cases with an iron hand.