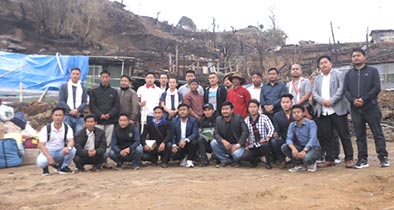 LONGLIANG, 1 Apr: A delegation of the All Arunachal Pradesh Students’ Union (AAPSU) visited the fire-ravaged Longliang village in Tirap district recently and donated all the relief materials collected during the union’s three-day statewide voluntary donation drive.

The relief materials included clothes, blankets and other items which were handed over to the gaon burah of Longliang village in the presence of PRI and other members of the village.

The team, led by AAPSU general secretary Tobom Dai, along with representatives of various district students’ unions and members of the Tirap, Changlang, Longding & Namsai Students’ Union of Itanagar and Rajiv Gandhi University, interacted with the affected villagers to ascertain the problems faced by them in the aftermath of the inferno.

Extending support and encouragement to the affected villagers, Dai said that whatever relief materials and financial assistance were being provided to the villagers by the AAPSU were made possible only through voluntary contributions from people of all walks of life across the state.

“I sincerely acknowledge our gratitude to the people of our state, right from Tawang to Longding, who have felt the sufferings of the people of Longliang and voluntarily contributed as per their capacity. It is this idea to pan-Arunachal that we as an organization have been striving for and should be imbibed by every one of us,” Dai said.

He also urged the village authorities to properly utilize whatever relief they receive to rebuild the lives of the villagers.

Dai added that the union has arranged for rice to be equally distributed among the affected families through the All Tirap District Students’ Union, which will reach the village once the road to Longliang is clear.

Shortly after the visit to Longliang, the AAPSU team visited the government secondary school (GSS) in Lazu and interacted with the faculty members.

Issues pertaining to shortage of subject teachers at the Lazu GSS, its shifting to the new site, the problem of teachers’ quarters, the dilapidated condition of the PMGSY road to Longliang, and immediately conducting a special medical camp for the villagers were raised with the deputy commissioner.

The DC assured to ensure early posting of teachers at the GSS in Lazu and setting up a medical camp at Longliang village, the AAPSU said.