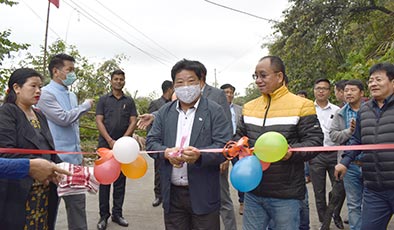 This section of the road had been washed away last monsoon at two stretches. The restoration work was undertaken by the PWD CD-B. A 30 metre CC culvert, an MSE wall (GI gabion wall) and a 300 metre CC pavement have been constructed as part of the restoration work.

Briefing the media, PWD AE Tadar Bhupen informed that the road has been opened only for LMVs. “There are still four major works to be completed, which include RCC drain, shoulder in between drain and road, protection wall at culvert and parapet wall. The work will continue and should be completed by April month,” he said.

Khimhum said that the state government is committed to improve the road condition in the state.

“The CM is personally interested in improving the roads of the state. The Papu Nallah-Jully-Chimpu road is a very important road as it is the only alternative to NH 415. The PWD is committed to improve this stretch of the road,” said Khimhum.

Kaso appealed to the people to develop parking discipline. “Road has improved but people don’t park properly. Lack of discipline is a big problem and it causes massive traffic congestions,” said Kaso.

He also said that eviction will be carried out if needed to upgrade the Papu Nallah-Jully-Chimpu road. “No one is above the law. People will have to follow government norms and vacate land if structure falls under RoW,” he said.

Regarding NH 415, Kaso said CM Pema Khandu has kept his word and completed the first phase before 31 March.

“Now the underpass construction at Bank Tinali is creating trouble for citizens. I as MLA of capital apologize to the citizens for the pain caused due to underpass work. It is going to take some time to complete. I regularly visit the underpass site to put pressure for its early completion,” said Kaso.

He urged the contractor to carry out repairing of the Naharlagun-Nirjuli (Package B) and the Nirjuli-Banderdewa (Package C) stretches of the NH.

Phassang asked the people of the capital region to behave responsibly and take good care of the road constructed by the government.

“The government has fulfilled its commitment by restoring the Ganga-Jully road and by completing the first phase of four-lane road project. Now the public should take care of it. Only blaming engineers and government won’t do,” said Phassang.

He said the IMC has appealed to the state government to construct pedestrian paths along the newly constructed four-lane highway.