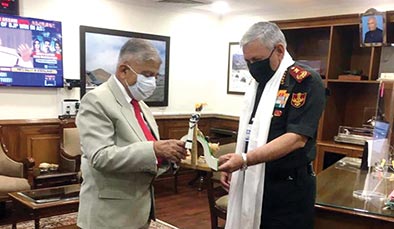 The governor, who is on an official tour of the national capital, emphasized on strengthening the road communication in the border areas of Arunachal. He also spoke about the recent development in the strategically important Miao-Vijaynagar road in Changlang district.

The governor called for “more concerted efforts” by the union government and the defence ministry in meeting the requirement of road arteries network upto the borders and remote districts of the state.

He also shared his observation about the lone sainik school in the state and sought help from the Sainik School Society.

The CDS pointed out that the prime minister’s vision is to open 100 new sainik schools in the country. “Arunachal Pradesh must bid for new sainik schools and plan to provide full infrastructure for the new sainik schools. These schools should be located in border districts and these must be developed on the day-schooling pattern, with a high standard of imparting quality education and good physical and sports training,” he said.

The governor assured the CDS that the state government would take all the initiatives needed. (Raj Bhavan)