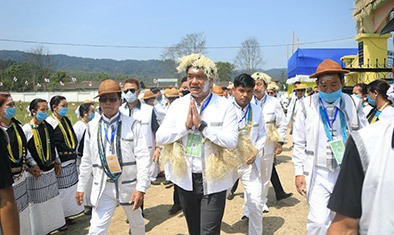 BASAR, 5 Apr:  Chief Minister Pema Khandu lauded the Galo community for zealously preserving its rich culture and successfully passing its heritage and traditions to the next generation.

Attending the Mopin festival at Basar in Leparada district on Monday, Khandu said “the rich culture of the Galos comes alive during Mopin, which has for years been their connect to the strong cultural roots.”

He especially lauded the huge participation of youths and children in the festival, which he said is a healthy way of passing down the rich indigenous culture through generations.

Khandu called upon each tribe of the state to participate in festivals of other tribes so that they come to know of each other’s traditions and culture.

“We have to know each other and develop respect for each other. Only then the pan-Arunachal feeling will emerge and we can all work together as Team Arunachal for the progress of our state,” he said.

Appreciating the Gumin Rego Kilaju, a local NGO that started the popular BasCon festival, for doing stupendous work in promoting Leparada district, Khandu urged its members to come out with a practical concept for not only promoting the district but also for its overall development. He assured wholehearted support to its initiatives.

The chief minister also put forward three issues for deliberation by the people and sought their feedback – the practice of polygamy, property rights to girls and drug addiction. He said times have changed and therefore people need to have a wider perspective of age-old practices and adapt to change wherever necessary.

He also met the members of the GRK. During the meeting, the members briefed the CM about the activities being undertaken by the GRK. This was followed by an oath administered by MP Tapir Gao to GRK members to never hunt, kill wild animals or consume wildlife meat.

A PowerPoint presentation was made by Tajum Yomcha on the biodiversity conservation of Nguda Pokcho, watershed area of four rivers of the area – Kidi, Hei, Hingen and Echi.