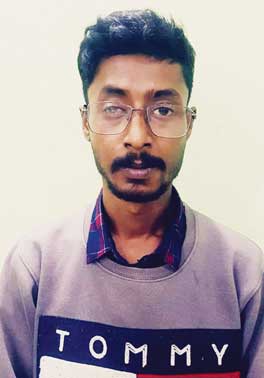 ITANAGAR, 11 Apr: The capital police have arrested one habitual offender, identified as Ajit Kanu, of North Lakhimpur, Assam, for indulging in cyber fraud.

Kanu was residing in Doimukh.

In a press statement, Itanagar Capital Region SP Jimmy Chiram informed that an FIR was registered on receipt of a complaint from a girl alleging that one person had “cheated money by opening a fake Facebook account in the name of David Watson.”

Apparently, she fell for the trap laid by the accused and transferred money without any proper verification. The miscreant also started blackmailing her by opening a fake Facebook account in her name and uploading vulgar messages on social media.

The police team got a breakthrough when it found that the money had been transferred through the PhonePe app and his mobile number was mostly active in the Doimukh area. On getting the clue, the investigating team set a trap in Itanagar area and arrested the fraudster on 3 April.

It turned out that the accused is a habitual offender and had earlier been arrested by the Naharlagun police in a case involving taking money from bank managers while posing as the PA of a local MLA.

The police are now scanning his profile and call details to ascertain if he has cheated others, as well.

Chiram lauded his team for cracking the case in such a short span of time, and cautioned the residents of the capital to “verify the Facebook account properly prior to giving acceptance.”

“It is pertinent to be mentioned here that there is a sudden rise in cybercrimes in the capital region by fraudsters using fake profiles and seeking money on account of medical treatment in the name of many renowned persons,” the SP added.