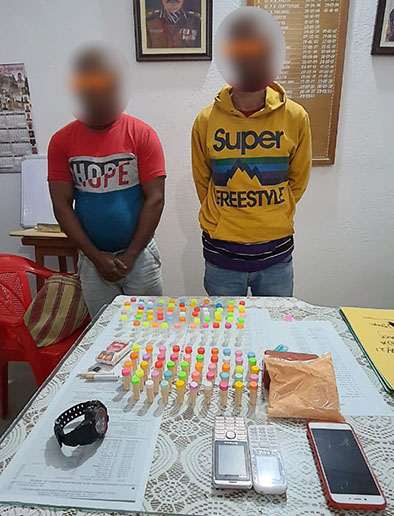 ZIRO, 23 Apr: The Lower Subansiri district police arrested two more drug peddlers on Friday, making it the third arrest of such persons within a week.

The peddlers, identified as Niri Naga and Md Surhab Ali, were arrested during a routine naka checking at the naka point in Kardo by a police team led by SI Tadu John. The police intercepted the motorcycle (AR-01D-0952) the peddlers were riding, and during checking found 49 plastic tubes and a plastic pouch suspected to contain contraband substances, along with 64 empty tubes in plastic carry bags in the duo’s possession.

A total of 16 gms of heroin were seized from them. A case (No 18/21 u/s 20 (B) of NDPS Act) has been registered at the Ziro police station and further investigation is underway.