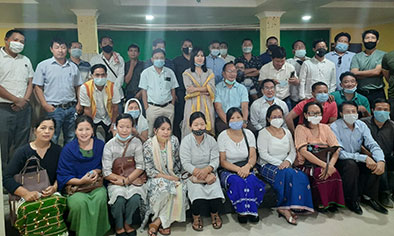 The memorandum said that the students of the school are being accommodated in temporary structures even after more than three years of the school’s establishment. It also said that six girl students have been admitted in the school in the current (2020-2021) session without proper and adequate accommodation facilities.

“There is urgent need to expedite the construction of the permanent building structures, including the administrative and educational blocks, the dormitories and the mess hall, residential accommodation for all the academic/administrative staffs as well as general employees, indoor games hall, playgrounds, auditorium, gymnasium and other sports facilities,” it said.

The parents stated in the memorandum that the chief minister had assured during the inaugural ceremony of the school that the permanent building for the school would be constructed within three years.

They accused the principal of the school, Lt Col Rajesh Singh, of “lacking administrative skill and proper cooperation with the parents and his own school staffs,” and demanded that he be transferred immediately.

The memorandum also stated that 18 teaching and non-teaching staffers, including general employees, have either resigned or have had their jobs terminated in a span of two years, and that the decision to terminate the jobs of the school employees was taken in a unilateral manner and without the approval of the local board of administration.

It stated that only the teachers are currently handling all the academic responsibilities of the school.