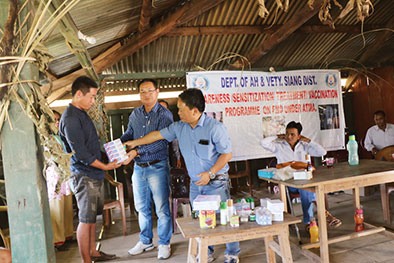 They explained to the villagers the ways and means to tackle FMD in the event of a massive outbreak, besides imparting awareness about the disease.

Along with the district AH&V office, the central zone DIO distributed medicines provided by the National Research Centre on Mithun, Nagaland. The DIO also explained the technicalities

behind the department’s inability to initiate ring vaccination against the disease at present.

Dr Mize assured the farmers of all possible help to combat FMD, “except vaccination, which has been put on hold by the government.”

During the visit of the veterinary team, no outbreak was reported or observed in Pangkang village. Three FMD infected mithuns quarantined in a WRC field were treated for FMD at Peging-Bote (Riga).

No mortality has been reported from any part of Siang district. (DIPRO)