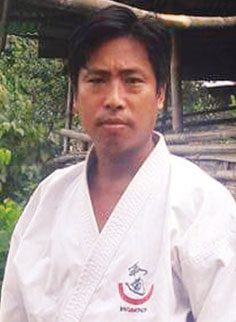 He died on the way to Guwahati while being shifted to a hospital there.

One of the senior most karatekas of the state, Tasa was a 6th dan black belt holder. He obtained the black belt first dan from JKF in Tokyo, Japan in 2005.

A silver medal winner in the AIKF event in 2005 in Tamil Nadu, Tasa had represented the country at the first IWF International Karate Championship in Kathmandu, Nepal, in 2017.

He was also an AIKF Grade B judge.

The sports community of the state deeply mourned the premature death of the young karate master.

The karate family of Arunachal conducted a condolence meeting at the Arunachal Karate Association (AKA) headquarters in Naharlagun and offered prayer for Tasa.

Karate Association India (KAI) president Likha Tara, senior members of the AKA and various other karate styles, including AKA general secretary SD Sharma, treasurer Tai Hipik and sensei Achu Bagang, expressed their condolence and sympathy with the bereaved family and prayed for eternal peace for the departed soul.

They recalled the contribution of Tasa in the development and popularization of the sport in Arunachal.

In a condolence message, AOA secretary-general Bamang Tago described Tasa as a “young and energetic one among the grassroots sport promoter of the state, particularly in Wado karate, and brought many laurels for the state in the past.”

Members of the AOA observed a two-minute silence as a mark of respect to the departed soul.

Extending condolences to the bereaved family, the association prayed for eternal peace of the departed soul.

The Arunachal Wado Karate-Do Association (AWKDA) in a separate condolence message described his untimely demise as a great loss for the karate family of the state and the country.

“His sincerity and dedication towards promotion of Wado style of karate in Arunachal and the country will always be remembered,” AWKDA general secretary Nanu Sangha said.