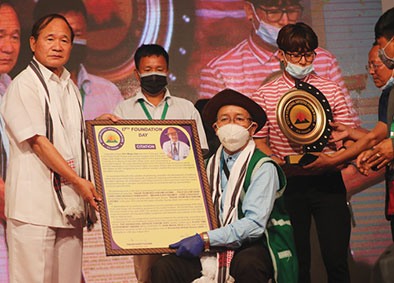 NIRJULI, 26 Apr: Former chief minister and Sagalee MLA Nabam Tuki has lauded the role of the Arunachal Artistes Forum (AAF) “in promoting music and culture of the state through the voice of artistes.”

Tuki was addressing the concluding function of the 17th foundation day celebration of the AAF last Saturday.

“Songs, music and culture go together and have a greater role in moulding the society. There are music and songs for all occasions,” he said.

“There is no dearth of talent among our tribal people, but our artistes need proper training and guidance to become professionals,” he added.

Tuki meanwhile appealed to everyone to follow the Covid SOPs.

AAF chairman Takam Dado Tallom informed that “we had planned for a huge gathering of all artistes and legendary and senior and prominent artistes from all the district and delegates, but due to Covid protocol, we have reduced and minimized all the activities,” he said.

“We have submitted a six-point memorandum to the state government, which include pension for artistes of above 60 years; establishment of a training institute; five percent job reservation; declaration of foundation day of the AAF as a state calendar event; grant-in-aid; the renowned and legendary artistes names to be remembered by renaming of community and cultural hall of districts as a mark of respect,” Tallom said.

Legendary artistes Moge Doji, Bengia Hemanta and Dr Nabam Tata were felicitated for their lifetime achievements with citations, while late Taro Chatung and late Techi Mecha were remembered with posthumous awards and citations.

Several awards were also given away to prominent artistes and budding artistes of the state on the occasion.