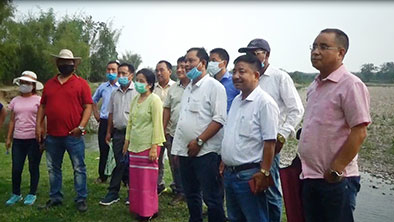 PASIGHAT, 27 Apr: The Brahmaputra Board has started a project for the protection of fertile croplands and public properties from flood and soil erosion by the Remi river in East Siang district.

A three-member team of engineers from the Brahmaputra Board, headed by the board’s Itanagar Regional Head Gammo Kamki on Tuesday carried out a preliminary survey along both sides of the river from the Mirem hills to Kemi village.

Kamki said the board will submit a detailed project report to the jal shakti ministry after the final survey, which will be carried out within the next few months. A detailed survey on the river’s course will also be conducted, he said, and urged the

villagers to “cooperate for successful implementation of the proposed project.”

Kamki said that Pasighat West MLA Ninong Ering had moved the jal shakti ministry for an anti-erosion project in his area during his tenure as union minister of state for minority affairs.

Ering, who met the board’s engineers during their visit, requested them to expedite the survey and other official procedures to get the project sanctioned at the earliest. He requested the board to prepare a project worth not less than Rs 300 crores, so that the project covers all the vulnerable areas.

The Remi river creates flood havoc on both its banks every year during monsoon. It has swallowed several acres of cropland and horticulture gardens. It is also posing a serious threat to the government middle school in Remi.