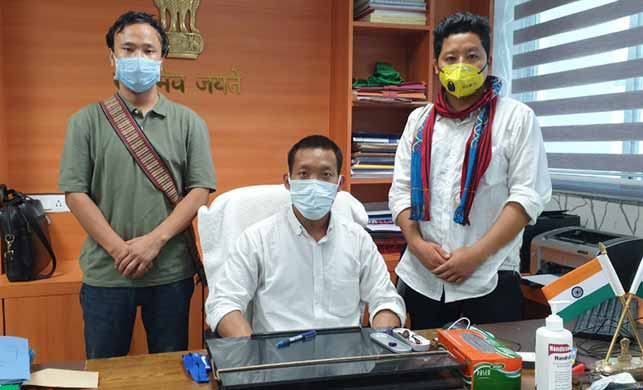 ITANAGAR, 29 Apr: Members of the Rajiv Gandhi University Research Scholars’ Forum (RGURSF) and the All Arunachal Pradesh Students’ Union (AAPSU) met Additional Education Secretary (AES) Ranpua Ngowa at his office in the civil secretariat here on Thursday morning and apprised him of the demand of the RGURSF to keep the RGU’s hostels open for scholars.

“Giving a patient hearing to our problems, he said the difficulties raised by scholars are very genuine and that the VC should have dealt with it within the university itself, without creating such hue and cry,” informed the RGURSF.

“We also told him in detail about the university authority’s behaviour and the not-so-fair solutions they have given,” RGURSF general secretary Prem Taba said.

The scholars informed the additional secretary that there are currently 101 research scholars in four halls of residence in the campus, and that they have agreed to follow the Covid SOPs.

The scholars said that Ngowa assured to call up Education Minister Taba Tedir and Education Commissioner Niharika Rai and try to convince them to bring a solution to the problem.

While the additional secretary said that the government cannot issue any official order in favour of the scholars due to certain Covid restrictions, he, however, assured to make “internal arrangement” for the scholars’ accommodation.