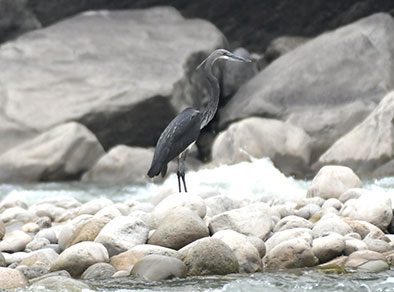 The white-bellied heron is categorized as critically endangered in the IUCN Red Data Book, and is listed under Schedule IV of the Wildlife Protection Act, 1972.

The elusive bird is one of the rarest birds in the world, and is presently only found in Bhutan, Myanmar, and Namdapha tiger reserve in Arunachal. It had also been recorded in the adjacent Kamlang tiger reserve in camera trap images.

“The sighting in Walong at 1,200 metres above mean sea level is the first record in higher elevation areas in India.

The presence of nesting sites within this area is a positive sign for the future habitat,” the PCCF office here stated in a press release.

“It is to be noted that the breeding season of white-bellied heron starts from February till June. So, it is advisable for the nearby communities, birders, tour operators and other individuals to stay from the area, since the bird is extremely shy to human presence,” it said.

The PCCF office requested the GBs and the village head of Walong to make the local communities aware of the need to protect the bird and conserve its habitat.

Principal Chief Conservator of Forests (PCCF) RK Singh said: “It is great news that this critically endangered bird is establishing new habitats beyond its traditional range. This itself epitomizes positive health of forest ecosystems in this biodiversity rich state.”

Chief Wildlife Warden G Kumar said, “It is a good sign for the rare bird to appear in the pristine forest area.” He applauded the conservation measures taken by the Anjaw DFO, and has “constituted a committee for fact-finding at this stage.”

A team comprising scientists from the department and reputed national institutions like the Wildlife Institute of India and the Zoological Survey of India “will jointly undertake field research for future conservation prospects for this rare and globally threatened bird,” the release said.