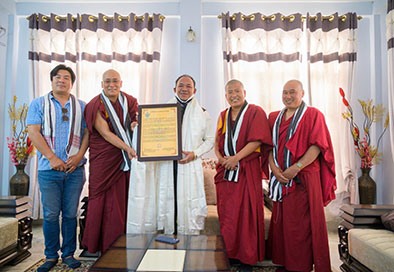 SEPPA, 30 Apr: Environment & Forests Minister Mama Natung said that the sports & youth affairs department will soon start a campaign themed ‘Drugs choro – khel se joro’, “so that youths will be engaged in sports activities instead of antisocial activities like drugs.”

He said that, “besides wildlife, drug abuse among the youths is one of the major challenges for the society.”

He was speaking to monks from the Bhikshu Sangha of the Gontse Gaden Rabgye Ling monastery in Bomdila (West Kameng) who felicitated him for the ‘airgun surrender abhiyan’.

The minister urged the monks to extend support from their end in creating awareness regarding drug abuse in the society.

He said “the state government will soon initiate a campaign for licenced guns in the state.”

He informed the monks that at least 900 airguns have been surrendered till date and people are still surrendering their guns voluntarily.

Commending the ‘airgun surrender abhiyan’ initiated by Natung to protect and preserve the flora and fauna, the Bhikshu Sangha felicitated the minister on Friday at his residence here in East Kameng district.

The sangha’s members, led by Ven Dondup Tsering Khen Rinpoche, along with Ven Lama Kalsang and Ven Phassang Tsering, handed over an ‘appreciation certificate’ and a handcrafted table to the minister as a mark of respect.

The rinpoche expressed appreciation for the minister for his effort to protect and preserve wildlife.

“There are teachings in Buddhism about nonviolence and to love and preserve every living creature, and so it is very praiseworthy to mention that, being a minister, you have taken a noble decision to preserve wildlife,” the rinpoche said.

Natung on his part thanked the rinpoche and his team for coming all the way from Bomdila, and said “it is our duty to protect and preserve wildlife; else a day will come when we have to only read and learn about birds and other wildlife in books.”