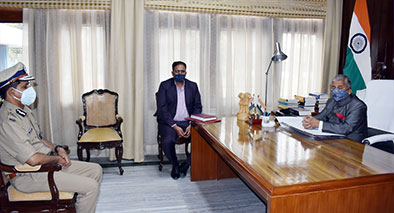 ITANAGAR, 3 May: The Indo-Tibetan Border Police’s (ITBP) Eastern Command Additional Director General (ADG) Amrit Mohan Prasad called on Governor BD Mishra at the Raj Bhavan here on Monday, and the two discussed the overall security scenario in the state and the welfare of the ITBP personnel stationed in the border areas.

The governor emphasized that, “to reinforce the security of the nation, the welfare of the personnel must be the priority.” He asked the ADG to regularly interact with the officers and personnel posted in the forward pickets in the border areas.

Mishra advised the ADG to maintain good relations with the local population and assist them in times of need. He also said that “civic action programmes must be promoted and taken up regularly to help the civil population in and around the areas of the ITBP forward posts.”

The governor further stressed that the Covid protocols must be maintained in all the establishments and posts of the ITBP. He also suggested that ITBP officers and personnel educate the villagers about the Covid-19 pandemic, so that the rural areas of the state remain safe from the coronavirus. (Raj Bhavan)