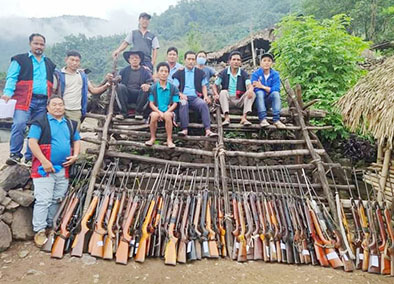 PASIGHAT, 7 May: The airgun surrender campaign launched by the state government to save wildlife continues to receive good response across the state with more and more people coming forward to surrender their guns.

In Upper Siang district, more than 100 airguns were surrendered by the people from various villages in Tuting and Yingkiong circles in the last two days. Forest officials said that at least 64 airguns were surrendered by the villagers of Komkar during an awareness meeting organized by the territorial forest department at their village on Thursday. They deposited their guns before DFO Annying Boli.

The residents of Likor village in Tuting circle also surrendered a total of 49 airguns at the DFO’s office in Yingkiong.

Reports of surrendering of airguns have also been received from Mariyang in the district. As per the report, a good number of airguns were surrendered by the locals before the Mariyang ADC.

A group of youth volunteers from Simong and Lamkang in Upper Siang are helping the forest department in organizing the air gun surrender campaign.

DFO Boli informed this correspondent that the (forest) range officers of Karko, Tuting, Pangin and Boleng have been directed to mobilize the people to give up their airguns.

Boli said an airgun surrender ceremony is being organized in Yingking, which Forest Minister Mama Natung and top forest department officials from Itanagar are expected to attend.