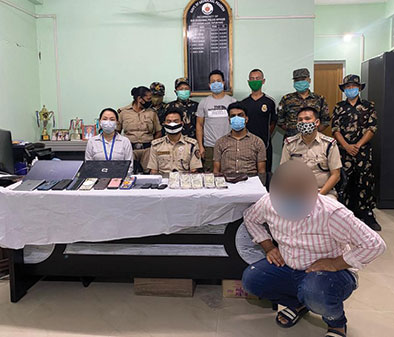 NAHARLAGUN, 28 May: The police here arrested a drug peddler, identified as Joseph Kino, from E Sector on 27 May.

Based on a tip-off, a police team led by Naharlagun SDPO Dekio Gumja, OC Inspector Khiksi Yangfo and SI SS Jha conducted a surprise raid at the rented house of Kino in E Sector at 9:30 pm.

During the raid, the team recovered two pouches of suspected heroin weighing 146.41 gms, Rs 1,50,000 in sales proceeds, eight mobile phones, and two laptops, in the presence of Magistrate Laxmi Dodum and independent witnesses.

Kino was arrested, and a case [No-89/21 u/s 21 (b) NDPS Act] has been registered at the Naharlagun police station, and further investigation is underway, the police said.

“The alleged accused is a major player in drugs business in Naharlagun/Itanagar region,” the police informed.