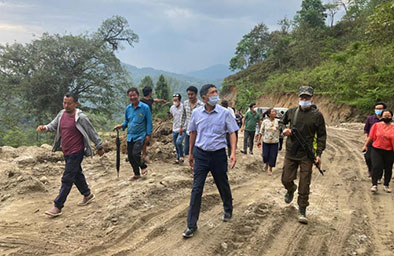 PALIN, 30 May: Kra Daadi DC Higio Tala said that people obstructing the construction of the Joram-Koloriang portion of the Trans-Arunachal Highway (TAH) will be dealt with with an “iron hand.”

The DC issued the warning after being informed by the executing agency that the work is progressing at a slow pace due to “lack of public cooperation” and “incessant rainfall.”

On Sunday, Tala inspected the ongoing highway construction work near 5 Mile area between New Palin and Old Palin (Package No 4) and expressed displeasure over the tardy progress of work.

Later, he held a meeting with the representatives of the National Highways and Infrastructure Development Corporation Limited and the EPC (engineering, procurement and construction) contractors.

The DC asked the executing agency to report any kind of unnecessary hurdles created by the public to the district administration. He assured them that such cases will be dealt with with an iron hand.

Earlier, the DC, accompanied by a team of administrative officers, visited the ongoing work at Package No 3 of the same route.

He expressed displeasure over the slow progress of work on this stretch also, and directed the executing agency to expedite the work.

“Laying of granular sub-base must be prioritized, particularly in those portions of the road which have been causing maximum blockages in smooth flow of traffic,” he instructed.

He also suggested to the contractors to engage more tools and machineries to ensure timely completion of the project. (DIPRO)