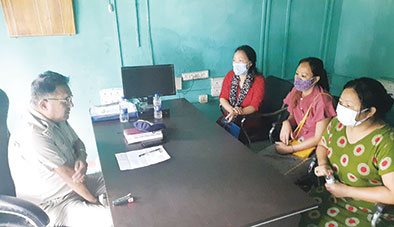 ITANAGAR, 8 Jun: The Seijosa (Pakke-Kessang) branch of the Arunachal Pradesh Women’s Welfare Society (APWWS) met SDPO SC Norbu on Tuesday to get an update on the child abuse case, and to seek early arrest of main accused Lukbir Bojir, who is still absconding.

The SDPO informed the APWWS team that the police are making every effort to arrest the main accused.

The accused, a government school teacher, has been avoiding arrest ever since the eight-year-old victim’s

father lodged an FIR against him.

Co-accused Miti Lego, wife of Lukbi Bojir, was arrested by the Yingkoing police on 29 May from Yingkiong in Upper Siang district. She has been brought to the Seijosa police station for interrogation.

Meanwhile, the central APWWS has reiterated its demand for early arrest of Bojir.