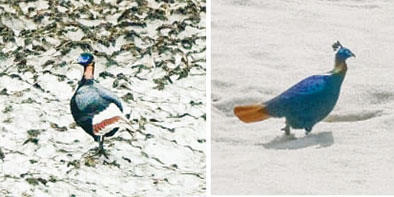 SINGGA, 8 Jun: In a significant finding in the avifauna diversity of Arunachal, the Sclater’s monal (Lophophorus sclateri) and the Himalayan monal (Lophophorus impejanus) have been sighted at Mount Eko Dumbing, which lies between Yingkiong and Singga in Upper Siang district.

The birds were sighted by wildlife enthusiasts Obang Mibang, Dr Tajir Tamuk and Geyon Tayeng while on an expedition to Mount Eko Dumbing, led by Everester Kishon Tekseng and his team in the last week of April this year.

The Sclater’s monal and the Himalayan monal were earlier recorded in Mayodia Pass and Sela Pass in Arunachal, but this is the first photographic record of these birds in Upper Siang district.

A total of 80 species of birds were recorded during the expedition.

Mount Eko Dumbing, situated at an altitude of 4,173 metres above mean sea level (MSL), is one of the highest peaks in Upper Siang district. Covered with snow for most part of the year, it is home to various species of flora and fauna.

The Sclater’s monal is listed as ‘vulnerable’ by the International Union of Conservation of Nature due to habitat loss and hunting. Such sightings help in understanding its distribution. A single male was sighted near Komji Lipik, at an altitude of 2,850 metres above MSL.

The Himalayan monal, a colourful bird, is more widely distributed from Afghanistan to Northeast India along the Himalayan ranges. A pair of male and female was sighted at Bomeh, at an altitude of 3,700 metres above MSL.

“Scalater’s monal is an endemic bird of eastern Himalaya, restricted range species, mostly recorded from junction of India, Myanmar, Tibet and the Yunnan province of China. It is a high altitude bird and rarely comes down below 1,500 metres. Its population is estimated to be only 10,000 individuals and is listed in vulnerable category of threatened species and is Schedule I species of WPA, 1972,” said RGU’s Zoology Assistant Professor Dr Daniel Mize.

He added that such sightings in some habitats indicate a healthy habitat. “Threats are mainly habitat degradation and overexploitation,” he added.

“Sighting the birds at Eko Dumbing indicates a pristine habitat, and the habitat needs to be protected,” Dr Mize said.

Regarding the Himalayan monal, the assistant professor said it is a more common bird.

“However, it is only found in the Himalayan range in India and sighting them at Eko Dumbing together means the area must be one of the most suitable habitats left, so it is an important bird in the state, which may need protection before adverse human interference takes place,” he said.

“Eko Dumbing and Upper Siang have rich flora and fauna biodiversity. They are paradises for wildlife and nature lovers and should be conserved,” said Dr Tamuk, an orthopaedic surgeon and wildlife enthusiast.

Everester Tekseng, who led the team, said, “The locals need to conserve the areas for wildlife tourism, which will also benefit local youths.”

Mibang on his part said, “The area needs to be conserved, preserved and protected for its healthy ecosystem, vegetation, diversity of species, and cultural and religious importance.”