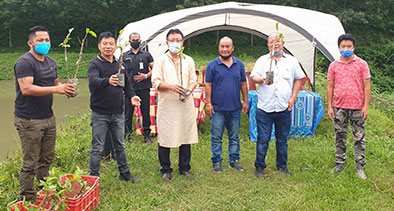 While distributing the saplings to 28 progressive farmers from Yachuli assembly constituency at the Green Gold farm in Tarajuli, Tedir said the time has come for the people to meet their daily requirement of basic food items with their own effort, instead of depending on other states.

“Our state has a vast geographical area with fine climatic conditions which support all types of vegetation. We need to cultivate necessary and required vegetables, food items and fruits and other necessary agri and horti crops,” he said.

“Besides making people self-reliant, such steps will also help the state’s economy,” the minister added. He lauded the efforts of Maj in promoting the agri-horti sector.

Tedir appealed to all the farmers of the state to properly utilize their land for cultivation of various types of horticulture and agriculture crops/products to become self-reliant without depending on government for contract and tender works.

Maj informed that he has distributed two lakh saplings of Lalit guava to the farmers of Yachuli assembly constituency in the last three years. “Saplings of other plants have also been distributed to farmers of other areas of the state, but it is a matter of great concern that most of the plants do not bear fruits as most of the farmers have not given proper care,” he said.