ITANAGAR, 13 Jun: A miffed Chief Minister Pema Khandu has written to his ministerial colleagues, asking why routine and basic functions are not being carried out properly.

The chief minister’s note came after students were forced to seek release of stipends, and contractual employees of the Pakke Tiger Reserve went on a strike, seeking release of six months’ salaries, drawing widespread criticism against the government.

“We are all fully aware that the state government has already laid down our vision for the state and we are all working towards realization of this vision. But it is seen that, more often than not, even the basic and routine functions like DPCs and normal committed expenditures like timely release of salaries of contractual employees, especially under the central sector schemes, scholarships and stipends, funds for mandatory essential functions like waste management, etc, are not being done. As a result, such grievances are being flashed through social and local media,” the CM said in a letter to the ministers.

“It is beyond my comprehension why such routine matters are not being dealt with and resolved timely. Why can’t we devise a system of time bound approvals for such matters? Why can’t we fix responsibility for red tape, inaction and such utter lack of devotion towards routine functions of government business transaction?” he said.

The CM urged the ministers to “personally look into the matter of all such cases across the departments and devise a mechanism for timely resolution and also fixing responsibility.”

“We must end this tendency of ‘reactive administration’,” he said, adding that he expects an early report in the matter. 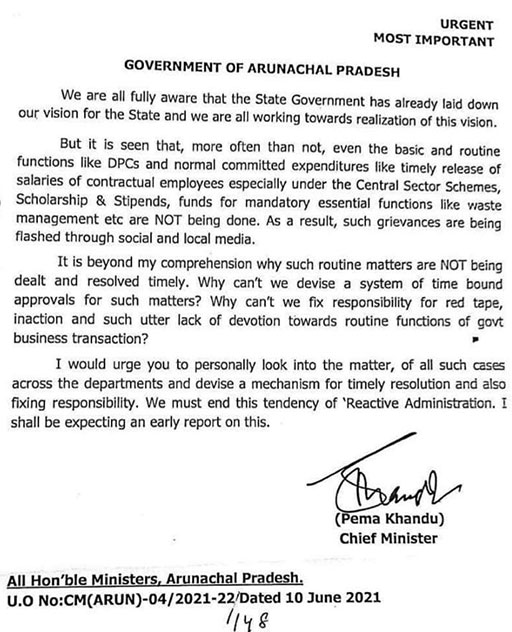