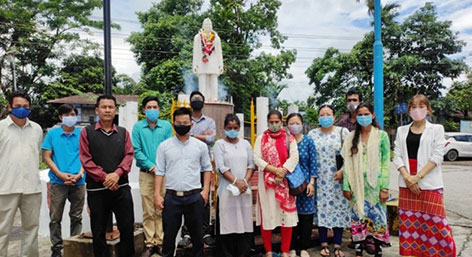 The programme began with members of the college, led by Prof Dhruba Jyoti Taid, paying ‘shradhanjali’ at the tombstone of late Ering with flowers and wreaths, followed by paying of homage at his statue near the Siang guesthouse.

A short meet was also organized in the college premises, where Prof Taid and JN College Assistant Professor Dr AK Jha highlighted the contributions of late Ering in the field of education and in society as a whole.

Born in Runne village near Pasighat on 11 December, 1929, Ering started his career in the Indian Frontier Administrative Service. Later, he was nominated as a member of the Lok Sabha from the North Eastern Frontier Agency in 1963, and also served as parliamentary secretary and deputy minister in the union food and agriculture ministry.

In 1964, he chaired the Ering Commission, which in 1965 recommended a four-tier system of local self-government, which greatly influenced the adoption of the panchayati raj system.