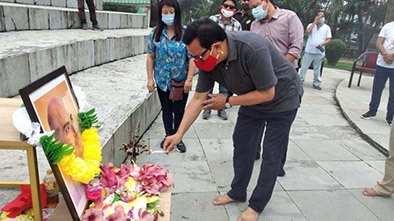 Dr Mukherjee was the founder of Bharatiya Jana Sangh (BJS), which later went on to become Bhartiya Janata Party (BJP).

In his tribute, Mein said the noble ideals and thoughts of Dr Mukherjee, who sacrificed his life for the unity and integrity of the country, will continue to inspire us.

“He opposed ‘do Pradhan, do vidhan’ approach of Jawaharlal Nehru on Jammu and Kashmir from the very beginning, because of which he resigned from the Nehru Ministry and formed the BJS,” he said.

“Dr Mukherjee was also a brilliant lawyer, an educationist and went on to become the youngest vice-chancellor of Calcutta University at the age of 33 years,” said BJP state general secretary Nalong Mize.

“It is because of visionary leaders like Dr Mukherjee the state of West Bengal, especially the strategically important ‘Chicken Neck’ near Siliguri, which connects the north-eastern states with the rest of India, became part of the union of India,” Mize said.

Dr Mukherjee’s death anniversary was also observed throughout the state by the party workers. To mark the occasion, various social activities, like cleanliness drives and tree plantations programmes were organized.

The West Kameng district BJP unit, in collaboration with the Pedung Youth Association conducted a plantation programme at Pedung Monastery area to mark the 68th death anniversary of Dr Mukherjee.

About 40 saplings were planted by the participants.