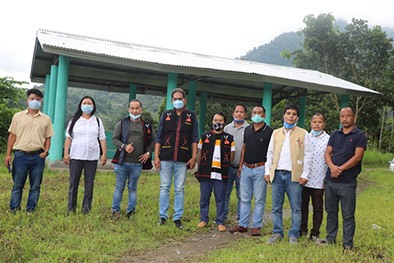 ITANAGAR, 27 Jun: Rural Development & Panchayati Raj (RD&PR) Secretary Amarnath Talwade concluded a whirlwind tour of Tirap, Changlang and Longding (TCL) districts. The tour, which had started on 23 June, was aimed at taking stock of the progress and implementation of various centrally-sponsored schemes (CSS) in the three districts.

Talwade, accompanied by PR Deputy Director (RE) Nabam Rajesh and PMAY SNO Tamo Rebi, kick-started the visit from Bordumsa in Changlang district, where he inspected the cluster farms in Magantong being developed under the 15th FC. Thereafter, he inspected the PMAY-G in Magantong and interacted with the beneficiaries. He also visited the rural link road constructed under the MGNREGA there.

After an overnight halt at Jairampur, he proceeded to Miao and visited the houses built under the PMAY and also the cluster farms there.

Prior to his arrival in Miao, Talwade visited the Pangsu Pass, the World War-II cemetery in Jairampur, CMAGY model village Longman, the volleyball court with solar lights facility constructed under the MGNREGA, the PMAY-G houses, and the Taipong cluster farming site which will be developed under the 15th FC. He also visited a few MGNREGA schemes on his way to Changlang.

Talwade then proceeded to Tirap HQ Khonsa, where he held a meeting and reviewed the progress and implementation of various RD and PR schemes in the district.

He urged the RD and PR department to ensure proper implementation of the CSS’ in Arunachal, where a majority of the population resides in the rural areas.

Tirap ZPC Chathong Lowang urged the RD&PR secretary to give special attention to the district.

On 26 June, Talwade and his entourage, accompanied by Dadam CO Pik Tayom and GB Kamnga Akhang visited Bera gram panchayat and inspected all the ongoing programmes executed under the RD and PR department.

Talwade also visited Longding on the same day and took stock of the progress of various ongoing schemes under the MNREGA, the PMAY, FFC grants, etc, in the district.

He also reviewed and discussed various issues pertaining to schemes related to the rural development department and their implementation. (DIPROs)