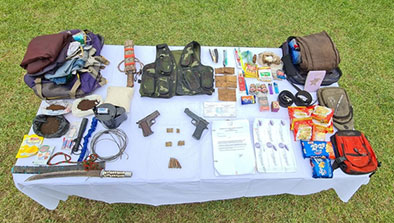 KHONSA, 26 Jul: Two hardcore Myanmarese militants belonging to the NCSN (K-YA) were apprehended from Lazu in Tirap district during a joint operation conducted by the security forces and the state police on Monday.

Acting on a tip-off about movement of suspected NSCN (K-YA) militants, the Khonsa battalion of the Assam Rifles (AR) along with a team from the Lazu police station launched a special operation at 9 pm of 24 July.

On 26 July, the team cordoned off a jhum hut and conducted a search operation at 1 am, which led to the arrest of the militants, who have been identified as self-styled (SS) sergeant major Komthok Ngongpa (37) and SS private Chungaung (27), both natives of Myanmar’s Nyamyong district, according an AR source.

A huge quantity of arms and ammunition, including two .32 mm pistols, 1,500 grams of IED, live ammunitions of AK 47, .32 mm pistols, a 9 mm pistol, and miscellaneous items like ration, clothing and NSCN documents were recovered from the insurgents.

“During on-spot interrogation, the duo revealed that they had been asked to infiltrate into the Indian territory in Lazu to carry out extortion activities and execute sabotage and nefarious activities against the security forces in south Arunachal by SS lieutenant colonel Thokwang Hodong, a resident of Lazu village,” the CO of the 6 AR said in a press release.

“Both the operatives acted as a reconnaissance party for selection of a suitable area to plant an improvised explosive device (IED) against the security forces and cause casualties to the security forces between Sanliam village and Barab Nala before 15 August, 2021,” the release said.

Reportedly, the duo succeeded in extorting money from Raho and Sinnu villages.

“They were apprehended by security forces before they could carry out extortion in other villages and plant IED against the security forces,” the release said.

“The arrest of these two hardcore militants has dealt a serious blow to the nefarious activities of the banned outfit in Tirap district and prevented huge amount of hard-earned money of the villagers to be collected and further going into the accounts of the NSCN (K-YA) leaders,” it said.

The apprehended insurgents, along with the recoveries, have been handed over to the Lazu police station for further interrogation. (DIPRO)