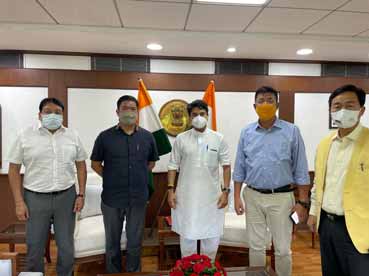 NEW DELHI, 5 Aug: Arunachal Chief Minister Pema Khandu called on union Civil Aviation Minister Joytiraditya Scindia here on Thursday, and informed him that the work for the Hollongi greenfield airport is underway on a war footing.

Besides pleading for conducting a feasibility inspection of the ALGs in Tuting and Mechuka for fixed-wing aircraft, the CM reiterated his request for starting fixed-wing flight operations at Pasighat and Tezu on priority. (CM’s PR Cell)