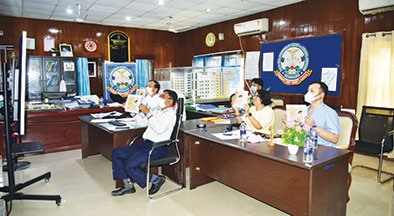 NAHARLAGUN, 7 Aug: A ‘multidisciplinary book on breastfeeding’ was e-launched internationally on the occasion of the World Breastfeeding Week on 7 August from Tomo Riba Institute of Health & Medical Sciences (TRIHMS) here.

The book has been written by contributors from various fields, such as public health professionals, paediatricians, obstetricians, gynaecologists, specialist nurses, nutritionists, sleep coaches and lactation professionals.

“This book is probably the first book in India which is dedicated to only breastfeeding and is completely evidence-based (based on scientific facts and researches,” a release from TRIHMS said.

“It will not only act as a reference for undergraduate and postgraduate medical and nursing students, lactation professionals, doctors and nurses but also may act as a guide to mothers who are pregnant or breastfeeding,” the release said.

It said that the book would help clear doubts and myths related to breastfeeding that exist in the society, “and can be relied upon without a second thought as experts, most of whom have also been mothers, have written about them.”

The book will be released in a few weeks, and is expected to benefit healthcare professionals as well as breastfeeding mothers and the community as a whole, the release said.