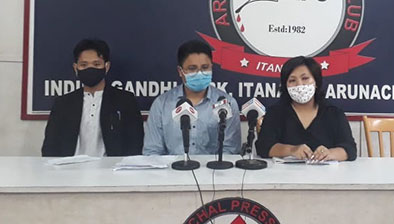 ITANAGAR, 11 Aug: The Mass Communication (MA) students of the Rajiv Gandhi University (RGU) on Wednesday claimed that they are being deprived of the full scholarship amount.

In a press conference held here at the press club, the Mass Communication students claimed that they have received only Rs 23,000 from the PMS scholarship for umbrella scheme, whereas it should have been Rs 50,300 as per the fee fixation committee of post matric scholarship under the chairmanship of Social Justice and Empowerment and Tribal Affairs on 5th October, 2017.

As per the committee, “the mass communication course is included under group-II alongside other

“We did not get the promised amount of Rs 50,300. We have received only Rs 23,000, while the diploma batch has received its full amount. Mass Communication is practical-oriented and a professional course. We relatively pay a higher admission fee as well,” said student Deter Geyi.

“We have visited the director of Higher and Technical Education (DHTE) to get our issues addressed since last June. We met the DHTE twice, but he said he has no idea. We have been told technical issues are being created by the National Scholarship Programme team,” said Techi Shakti, another student representing the RGU’s mass communication students.

“We want the remaining amount to be disbursed to us within this academic session,” Shakti added.

Expressing dismay over what they claimed to be unjust to them, the students said they are being “denied and deprived.”  Further, the students informed that they would resort to a democratic movement if their demand is not fulfilled.

However, the national scholarship portal (NSP) had clarified that the mass communication master’s degree course is grouped under Group 3 of the academic year (AY) 2020-21 by the state nodal officer.

“The master’s degree for mass communication course is grouped under Group 3 of AY 2020-21 by the state nodal officer, so the amount calculated is less,” stated an NSP official.

It was further informed that the payment procedure is completely automated and there is provision for one-time payment and would not be possible to process the amount for AY 2020-21 from the NSP.

The official also suggested that “the mass communication department may correct the course grouping and verify the amount using the option provided.”

This daily had sought a response from the Director Higher and Technical Education on the issue. However, the director did not respond.