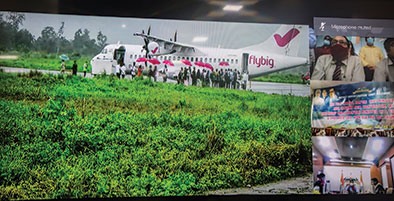 ITANAGAR, 19 Aug: In a landmark milestone achieved in the aviation history of the state, Arunachal Pradesh Chief Minister Pema Khandu on Thursday flagged off the first scheduled flight of Flybig Airlines from Tezu airport in Lohit district to Guwahati, Assam.

Reportedly, at least 30 passengers took the first flight from Tezu to Guwahati on the day.

Attending the inaugural flight ceremony virtually from Itanagar, Khandu said this is another feather in the cap of the aviation sector in the region, a sector he said that didn’t attract much attention from the central government before Modi came to power.

“Operationalization of the Tezu airport will boost connectivity of Eastern Arunachal that will facilitate easy and fast accessibility to economical activities, business and health services to the people,” Khandu said.

“A large chunk of the Indian Army and paramilitary personnel are serving in different parts of the state. Now they will also have a faster travel option to and from home,” he said.

On the occasion, the chief minister announced that all army and paramilitary personnel availing the Flybig flights from Tezu and Pasighat will pay only Rs 75 (one way) as fare till 31st December, 2021. The gesture from the airline company is in commemoration of India’s 75 years of Independence.

He thanked Flybig founder and Managing Director Capt Sanjay Mandvia, who was also present on the occasion, for the noble gesture. He said it is befitting respect and recognition bestowed on armed personnel for their services to the country.

Khandu also expressed gratitude to Prime Minister Narendra Modi for conceptualizing and implementing the UDAN scheme under which air connectivity in the state has been possible.

He requested Mandavia to explore possibilities of extending similar services to the rest of the ALGs operational in the state.

Khandu informed that in a recent meeting at Delhi, Union Civil Aviation Minister Jyotiraditya Scindia has assured three more airports in Arunachal Pradesh – one at Dirang in West Kameng, second at Anini in Dibang Valley, and a third in Upper Subansiri district. He said the process of land acquisition is under process and once done, these will be handed over to the ministry free of cost.

“Once the Hollongi airport is complete and with others coming up in the future, the very face of Arunachal Pradesh will change,” he said.

Khandu congratulated the people of eastern Arunachal on the landmark achievement and urged them to take optimal benefit of the facility.

Flybig, which is operating ATR 72 aircraft with a seating capacity of 72 persons at the moment, has got the approval to commence flights between Guwahati-Pasighat, Pasighat-Shillong, Guwahati-Tezu, and Tezu-Imphal under UDAN scheme of the central government. (CM’S PR Cell)