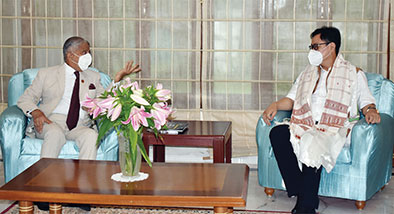 ITANAGAR, 19 Aug: Governor BD Mishra requested Union Law Minister Kiren Rijiju to establish a full-fledged High Court for strengthening the judiciary system in the state. He also requested the minister to augment the infrastructure and the human resources for the courts in the state.

The governor said this when the law minister called on him at the Raj Bhavan here in Itanagar on Thursday.

The governor asked Rijiju to expedite essential development projects of the state to increase the pace of development in Arunachal Pradesh.

The governor also congratulated Rijiju for being the first person from Arunachal Pradesh to be included as a cabinet minister in the Union Government.

He expressed hope that as a member of the Union Cabinet, Rijiju will strengthen the North East development policy of Prime Minister Narendra Modi and will contribute effectively to the progress of Arunachal Pradesh.

Rijiju, who is starting his ‘Jan Ashirwaad Yatra’ Programme from Itanagar today, sought good wishes from the governor.