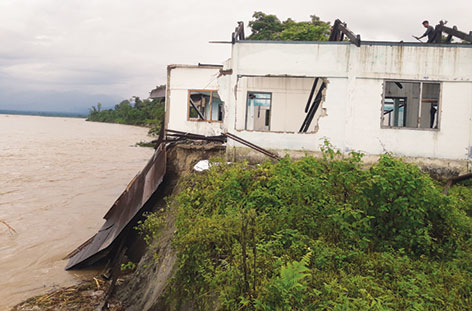 PASIGHAT, 30 Aug: River erosion has taken a serious turn in Mebo subdivision in East Siang district as the swelling Siang river has devoured a number of school buildings and croplands there.

The river has completely swallowed the Sigar lower primary school compound and gripped several acres of fertile croplands in Motum and Ralling. It also washed away the girls’ hostels of the Borguli secondary school. The sericulture farm and the department’s SPT office building in Borguli, along with several bamboo groves, orchards and horticulture gardens have also been washed away.

The turbulent river water also breached the Mebo-Dhola PWD road between Borguli and Serum, and is posing a serious threat to the existence of Serum village.

The Siang was still flowing above the danger level at Komlighat here on Monday.

Meanwhile, members of the National People’s Party (NPP) of the district, led by its president Shoney Pertin visited the flood- and erosion-hit areas. They demanded that the state government take up effective anti-erosion measures to save the fertile croplands and human habitations.

“The elected leaders of Mebo are silent over the alarming situation for reasons best known to them,” said the party’s East Siang district unit general secretary Olik Megu. He alleged that the anti-erosion project worth Rs 35 crores implemented with DoNER ministry funds two years back “has been misused by the elected leaders.”

Megu urged the local MLA, the Arunachal East MP and the zilla parishad leaders to raise the issue with the state and the central governments.

Officials of the Pasighat water resource division said that a proposal for an anti-erosion project covering both banks of the Siang river, with an estimated cost of Rs 370 crores, has been submitted to the technical advisory committee of the state government for approval.

The DoNER ministry had sanctioned Rs 35 crores as one-time central financial assistance for erecting an embankment in Mebo two years ago. However, the schemes failed to protect the rural areas from flood and erosion.