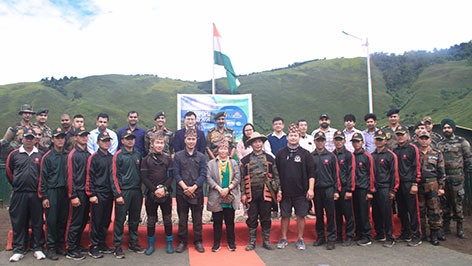 The 17 days long joint trek will be led by Everester Tine Mena, along with members of Dibang Adventures.

The Athu-Popu is a sacred place for the Idu Mishmi tribe. This holy place is situated nearly about 220 Kms away from Anini via Malinye near the border to China at an elevation of 3,500 meters from mean sea level. According to Idu-Mishmi mythology, the souls of their ancestors live in Athu-Popu. It is also believed that after one’s death, one’s soul is guided to Athu-Popu by the Igus (Priest/shaman). At this sacred place, a big mass of stone stands alone, and it is believed that the priest ‘Sinerwu’ once cried on this sacred stone on getting the news of his mother’s death. The stone still bears the impression of the priest’s palms and his tears, as believed. There is also a wild paddy field near Athu-Popu, believed to be cultivated by the departed souls.