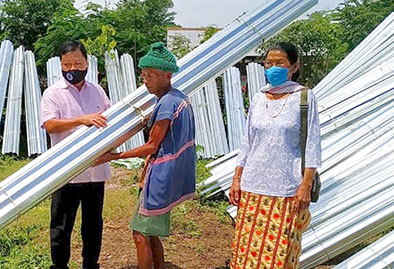 He exhorted those with large land holdings to “accommodate and help in the rehabilitation of those forced to shift to Popir Patang and other upper areas due to the Siang flood.”

Commending the PWD, the PHED and the DoP for their prompt response, he asked the departments to “leave no stone unturned in carrying out relocation and restoration of basic amenities like roads, water and power supplies in the newly shifted areas.”

Tayeng also instructed the local administration and other departments to carry out proper damage assessment. Stressing on the need for setting up a proper school infrastructure, following the washing away of the lone LPS due to the Siang flood, he asked the villagers to identify an appropriate area, “so that the matter for its funding and establishment could be pursued at the appropriate levels.”

He observed that electric poles and other materials were dismantled and shifted to higher locations, re-erected and realigned, and that the 350-metre long power lines have been restrung, thereby restoring power supply to Sigar village.

“The villages located along the left bank of the Siang river have been at the receiving end of nature’s wrath with floodwaters breaching the PWD roads connecting Borguli, Seram and Sigar villages and eroding acres of fertile agricultural fields and other infrastructure like sericulture farms, old boys’ and girls’ hostels, the youth festival ground in Borguli, Kolbari in Namsing, and Kotga Gora in Mer village,” observed the MLA.

Tayeng was accompanied by Mebo ADC Ainstein Koyu, EAC Janes Mary Tayeng, the EEs of the PWD, the WRD, the PHED and the DoP, officers of the agriculture and horticulture departments, ZPMs Gumin Tayeng and Oter Ering Tayeng, and others. (DIPRO)