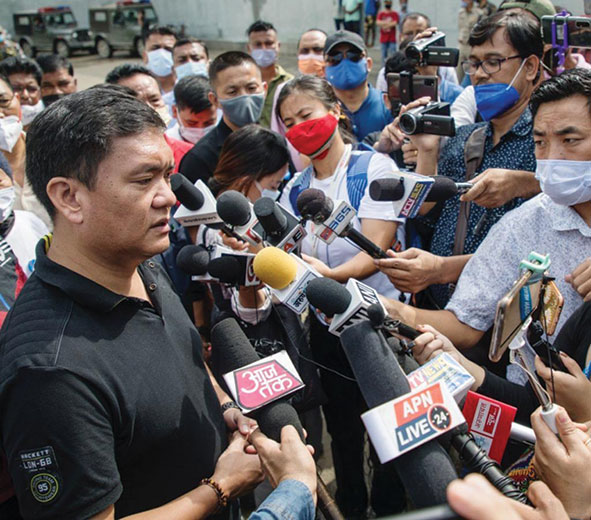 ITANAGAR, 6 Sep: Chief Minister Pema Khandu on Monday said that the contractors and the highway department would take the responsibility of carrying out maintenance work on the Naharlagun-Banderdewa stretch of NH 415 till the actual work begins.

The CM informed about the maintenance work after inspecting the Naharlagun-Banderdewa stretch of the highway early in the morning, along with MLA Phurpa Tsering, IMC Mayor Tame Phassang, ICR Deputy Commissioner Talo Potom, PWD Highway Chief Engineer S Sumnyan, and a host of officials.

The Khandu government has faced a barrage of criticism from the public over the poor condition of the Papu Hill (Naharlagun)-Banderdewa stretch. The chief minister assured that “maintenance work on the road will be completed by the end of this month if the weather is favourable.”

On the status of NH 415 from Papu Hills to Banderdewa, Khandu informed that the tender process for Package B (11.3 kms) from Papu Hill to the Nirjuli veterinary office has been completed, while the work on Package C (7.3 kms) from Nirjuli to Banderdewa would begin soon. He added that Package C would include construction of a 1.1 km viaduct to bypass the landslide-prone area in Karsingsa.

The CM also said that the underpass in Itanagar and the second bridge in Chandranagar would be completed by the end of this month.

On being asked about the poor maintenance of the Itanagar-Hollongi road, he said, “For the highway portion, the highway department, government of India and the contractor have to do maintenance. However, in NH 415 Hollongi, there is a major damage, which is beyond the capacity of the contractor to do restoration.”

Meanwhile, on the report regarding the delay in releasing of old-age pension and divyang pension by the social justice, empowerment & tribal affairs department, Khandu termed the delay “unfortunate” and assured to instruct the department to ensure timely release of the funds.