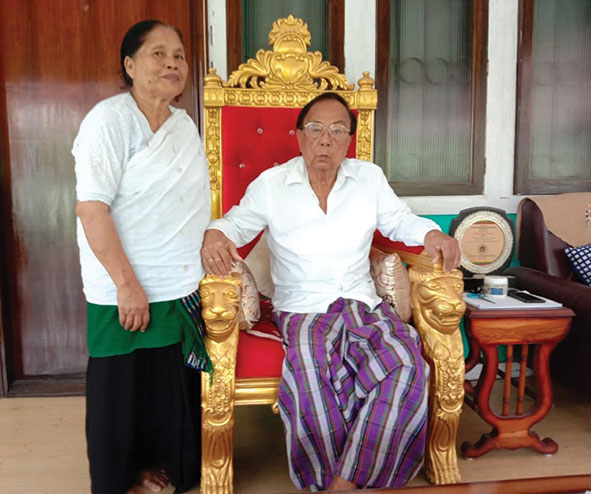 “I am extremely shocked and saddened to learn of the untimely demise of the Khamti chief,” said Mein, and added that “he will be remembered as the first indigenous tribal from the state to hold the prestigious post of PCCF.”

He added that the Khamti chief, after retiring as PCCF, served as the chairman of the Chongkham Village Council and worked for the uplift of the society.

Mein said that Namchoom would be remembered as an efficient and dedicated officer, “and for his immense contribution in the preservation and promotion of indigenous culture and language in the society.”

The DCM conveyed heartfelt condolences to Namchoom’s family, friends and well-wishers, and prayed for eternal peace of the departed soul.

The DCM paid his last respects to the late Tai-Khamti chief by laying a wreath on the glass casket in which his body lay in waiting for public homage at the Chongkham crematorium ground.

The state government has declared a public holiday in Namsai district on Tuesday as a mark of respect to the Tai-Khamti chief. His last rites will be performed on 7 September.

Governor BD Mishra has also mourned the demise of the Tai-Khamti chief.

“Namchoom, who was the first tribal PCCF of the state and former chairman of the Chongkham Village Council, played a key role in the preservation and promotion of indigenous culture and language,” the governor said in his condolence message, adding that in his passing away, the state and the Tai-Khamti society have lost a socially influential torchbearer who immensely contributed to social reforms and development.

“I join my Tai-Khamti brethren in praying to the almighty to give eternal peace to the departed soul and strength and fortitude to the bereaved family bear the irreparable loss,” the governor said.

The Itanagar Theravada Buddhist Society (TBS) has expressed profound sorrow and offered condolences to the bereaved family of late Namchoom.

“Under his leadership and guidance, the society has made great progress. He is widely recognized for his visionary leadership and compassion. His contribution to the preservation of culture and language will be remembered forever,” the TBS said, adding that it joins the people of Namsai district in this period of mourning and reflection.

The Adi Ba:ne Kebang (ABK) has also deeply mourned Namchoom’s demise. In a condolence message, ABK president Getom Borang said the ABK stands with the bereaved family in this hour of sorrow. Recalling Namchoom’s immense contributions in the preservation and promotion of indigenous culture and language, the ABK prayed for eternal peace of the departed soul. (With inputs from Raj Bhavan & DCM’s PR Cell)