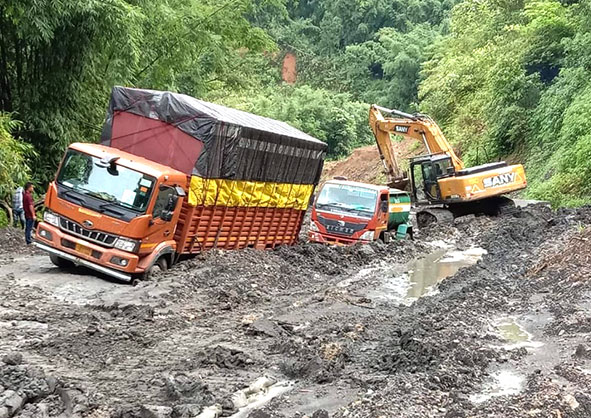 ITANAGAR, 11 Sep: Most of the road projects in Arunachal get delayed due to one reason or another, and the two-lane highway from Longding to Khonsa is no exception.

“No construction activity is being carried out by the construction company since the last couple of months due to reasons best known to it,” said Wancho Students’ Union president Pongngoi Joham.

He said that Agra (UP)-based SKS Infra Project Pvt Ltd was awarded the work of constructing the 42.50-km Longding-Tissa-Khonsa (NH 215) road more than a year ago.

The student leader alleged that, barring a few, most of the culverts, retaining walls and drains constructed so far all along the road are of substandard quality.

Stating that the road is the lifeline for the people of Longding and Tirap districts, he demanded reconstruction of the poorly constructed culverts, drains and retaining walls.

“This road, which can be extended up to the Indo-Myanmar border, is very crucial in terms of connectivity and business, and for overall growth of the economy of the state,” Joham said.

He has also drawn the attention of the Tirap district administration towards the poor quality construction, and appealed to the DC to inspect the road and instruct the road construction company to execute the work as per the norms without any further delay.

The union said that no second party should be engaged in the construction.

“We do not want the work/construction of the road to be further divided into sublet system,” the union said in a letter to the DC.

There are a total of 264 culverts all along the road, besides one major and two minor bridges.