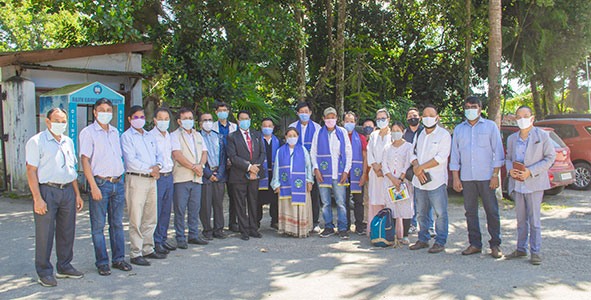 RONO HILLS, 13 Sep: A three-day workshop on documenting the language and culture of the Ashing (Adi) community got underway at Rajiv Gandhi University (RGU) here on Monday.

The programme is being organized by the Centre for Endangered Languages (CFEL), Arunachal Institute of Tribal Studies (AITS), RGU, under the project titled ‘Documentation of endangered languages, oral narratives and cultures of the lesser-known tribal communities of Arunachal Pradesh’. It is supported by the North Eastern Council.

“Ashing (Adi) is one of the least known and undocumented languages under the larger ambit of the Adi ethnic identity of Arunachal Pradesh. This speech variety is spoken only by around 10 speakers who live in Ngereng village, Kuging village, and a few families in Tuting township in Upper Siang district,” informed CFEL research associate Kombong Darang in a release.

Based on the UNESCO’s Language Vitality and Endangerment Framework (2003), Ashing can be classified as a moribund language. It is on the verge of extinction since the intergenerational transmission of the language has been discontinued and the present speakers are also already aged.

Addressing the inaugural programme, RGU Vice Chancellor Prof Saket Kushwaha thanked the Ashing speakers “for their hospitality towards the research team during their stay in the field,” and urged the native speakers to “continue speaking their language for intergenerational transmission of the language and document it before it vanishes from this world.”

Prof Kushwaha urged the CFEL to document the language in both textual and digital formats, “besides developing a video documentary on this speech community.”

Citing the examples of the third language subjects in the school education of Arunachal, RGU Registrar Dr NT Rikam urged the CFEL to “collaborate with the native speakers to develop the language in a book form, so that it can be learned in and out of school by future generations.” He stressed the need for “looking at the future implications of the language lost” and urged the Ashing speakers to adopt strategies to preserve their language before it is lost forever.

Danggen assured to extend every possible help to the RGU research team in the preservation and documentation of their language and culture, while Tamut, who is the only competent Ashing speaker, said she would continue to speak the Ashing language “till the sun and moon keep rising.” She urged the university to extend help in the best possible way to preserve their language and culture.

Dugbang Lipir, who belongs to the Tangam (Adi) community, is also attending the programme as a language consultant and interpreter. During the interaction programme, Lipir, who is from Kuging village, said that “the preservation of any language is a two-way process, wherein the efforts of both the native speakers and collaboration agencies like RGU and governments are essential.”

CFEL coordinator and principal investigator of the research project, Prof S Simon John said “the main purpose of the workshop is to bridge the gap between the university and the communities.”

CFEL research associate Kaling Dabi introduced the native Ashing speakers to the university, and spoke about the month-long fieldwork experiences of the research team in the Ashing villages.