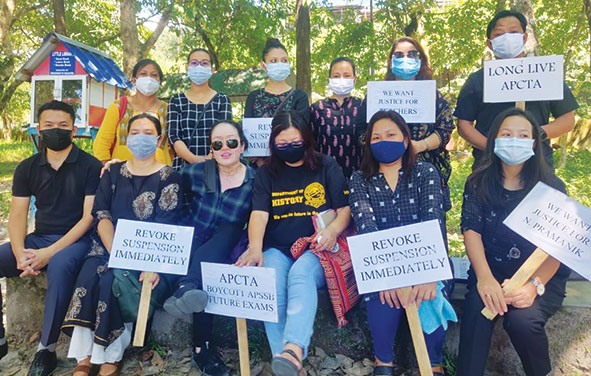 ITANAGAR, 14 Sep: Rallying behind Associate Professor Narendra Pramanik, the teaching community of Dera Natung Government College (DNGC) here, under the aegis of the Arunachal Pradesh College Teachers Association (APCTA) on Tuesday staged a protest rally in the DNGC premises against the suspension of Prof Pramanik, and demanded immediate revocation of the suspension order.

The teachers also demanded removal of the Arunachal Pradesh Staff Selection Board (APSSB) secretary and the education commissioner. The faculty members of the government college in Bomdila (West Kameng) also staged a protest in solidarity with Prof Pramanik.

“We have submitted a representation and did all formalities, seeking revocation of the suspension order against Prof Pramanik,” said the APCTA’s DNGC unit joint secretary Goli Nyodu.

“Today we are gathered here to express our resentment as we are outraged at the statement of APSSB Secretary Santosh Kumar Rai,” Nyodu said, and demanded immediate removal of the APSSB secretary and the education commissioner.

The APCTA also expressed dissatisfaction with the statement issued by Education Commissioner Niharika Rai on the suspension of Prof Pramanik. It further expressed displeasure over the lack of support from the education secretary and the higher & technical education directorate.

“They should have intervened once the suspension order was issued and should have followed the normal procedure, that is, at least an explanation letter of sorts before passing such a defaming and character-tarnishing suspension order,” the APCTA stated.

“Just because he reported and took necessary action against a cheater in the examination hall. The reason for suspension order just because the invigilator was a private teacher is uncalled for,” it added.

It further said that “the APSSB’s and the district administration’s involvement is questionable as jammer didn’t work and a student managed to bring a phone inside the exam hall.”

Prof Pramanik has been suspended by the education commissioner over alleged gross negligence during the APSSB exam held from 17-18 July, during which a female candidate was caught red-handed using a mobile phone inside the examination hall (Room No 25).

Holding Prof Pramanik responsible for the lapse, the education department suspended him at the recommendation of the APSSB, accusing him of violating the standard operating procedures of the APSSB by engaging private teachers for invigilation duty.

Prof Pramanik has denied the charges and claimed that the invigilators were appointed by the ICR DC on 6 July, as recommended by the DNGC principal. He said he had no role in appointing the invigilators, adding that the district administration in its inquiry report gave him a clean chit in the matter.