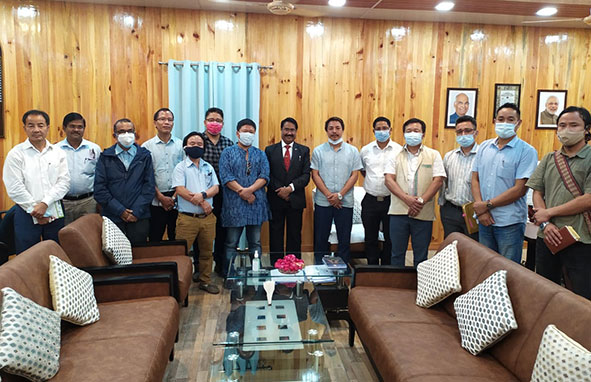 ITANAGAR, 14 Sep: Rajiv Gandhi University (RGU) has reportedly sought 30 days to review the RGU Ordinance-2021 and make necessary amendments to it, besides giving assurance that it would set up a committee to look into the matter of admission of waiting-list APST candidates to PhD courses.

This is an outcome of the RGU’s meeting with the All Arunachal Pradesh Students’ Union (AAPSU) on Monday, informed AAPSU vice president (administration) Meje Taku on Tuesday.

Taku, who is spearheading the issue, informed that “a fresh committee will be constituted under the chairmanship of a local faculty with 80 percent tribal officer/faculty representation, which will completely review the ordinance and submit their report to the university.”

“Our students have the potential to pursue research and contribute to the university’s and the state’s overall growth. They should not be denied basic rights like education in RGU. They only want to study. In fact, RGU should encourage such local talents who have made it to the waiting list even after competing in the non-exempted category, nurture them and provide space and resources to make good use of their calibre,” Taku added.

The university has assured to constitute a committee to look into the matter of admitting the 29 left-out APST students who are still in the waiting list for admission to PhD courses, informed AAPSU president Hawa Bagang.

“The third-phase result is expected to be published after ascertaining the PhD vacancies under various departments,” he added.

Bagang while thanking the RGU vice chancellor for his cooperation in resolving the issues through dialogue also called upon the research scholars to pursue their research work with sincerity, “maintaining standards and quality of work, so that it boosts the growth of the university in the NIRF rankings as well.”

The AAPSU had been at loggerheads with the RGU administration over PhD seats and rectification of the RGU’s ordinance since the university published its RGU PhD Entrance Test (RGUPET) result on 1 September.

Earlier, the union had claimed that, for the total 138 vacant seats, only 56 APST students had been selected.

Subsequently, 31 ‘resultant vacancies’ were made available, in which 22 APST candidates were selected and the rest of the seats were given to the general, SC and OBC-NCL categories, increasing the total number of PhD seats from 138 to 169.