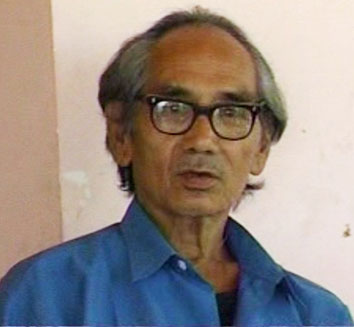 (The family of L Wanglat expressed great sorrow over the passing of his father, Ang Wangnyum (chota Raja) at the age of 101 on Saturday. The family shares glimpses of his eventful life and the contributions he made to his people.)

Brief on the life of the last Ang Wangnyum of Borduria Kingdom (as per Ahom Buranji).

The youngest son of Chowpha Wanglin the III, Ang Wangnyum was inducted by the NEFA administration as a village level worker in 1954 along with late Wangdong Medam and late Jaliam Medam of Borduria village. They were sent to Pasighat for basic training before being deployed into the Wancho area. After three months training, he was sent to Chanu village to be the agent of the government of India to bring the aborigines of Wancho villages to assimilate into the Indian system.  Although he was posted at Chanu village he was given responsibility to look after Longsom village, Chatong village, Ngusa and Ngunu under the overall supervision of late KD Menon, the agriculture inspector of the NEFA administration.

By 1956, he decided to quit the job on the ground  that the place of posting was too far from Borduria. The NEFA administration did not want to lose the service of a powerful Ang’s son, so they offered him a paid post known as Political Interpreter in 1956 and allowed him to work from Borduria but he had to report to Khela, the headquarters of Tirap Frontier Tract for six months. After that he was allotted an OB Type two-room bamboo house at Khela. After Tirap headquarters was shifted to Khonsa, he continued to serve the NEFA administration as Zamadar. He voluntarily retired from active service after the 1962 War.

The reason for the NEFA administration picking him up to be a village level worker was due to his aggressive leadership. Along with the NEFA administration beside him, he would bulldoze projects in both the Nocte Naga and Wancho area. For instance, he was given the responsibility to look into public participation for the construction of the Khonsa- Nuasa road, Khonsa Hukanjuri road and Khonsa to Changlang road. There would always be intense energy wherever he went. Without using too many words, he would naturally take control of the situation with his pistol hanging on his waist and a menacing gun in his hand.

However, he was very hard working and he would lead the way in clearing the jungle for the road. He deliberately walked very fast and it was hard to catch up with him.

Knowing Ang Wangnyum capable and commanding, Chowpha Wanglin the III deployed him to accompany the government of India officials from the Survey of India and Ministry of Forest along with some NEFA officers to demarcate the boundary between Namsang and Wancho Naga communities. As usual, he, along with the representatives from Paniduria, Pulung, Noksa, Longo and Chasa created a boundary tract.

The Borduria Reserve Forest was officially notified as a forest belonging to the Ang and his family in 1948. He did it for his father Chowpha Wanglin the III, his elder brother Ang Towang and for himself (Ang Wangnyum).

After Ang Towang died in 1963, Ang Wangnyum took charge as the Ang of Borduria. Crores of money came as shared revenue from the government of India for the Ang family of Borduria and Namsang. Sadly, after signing the receipt on the draft, the NEFA administration took it away and they were given maintenance allowances along with children’s education. Ang Wangnyum was given Rs 12,000 per year and the same amount continued even after 58 years, which is a meager amount for the eminent services he has rendered for the Kingdom of Borduria (Salah-Jaa).

Ang Wangnyum would be bossy, impatient, quick-tempered, which led him to a confrontation with the political officer late Loveraj.

For the kingdom of Borduria, he was very aggressive and a workaholic. He would not accept any criticism against the Salah-Jaa.

His strength was in taking charge and making decisions. He had extraordinary leadership in getting things started and moving people.

During the Khela Namsang War, after the first group left for war till Khonsa village area he demanded the ‘Waa-Bang Pangmi’ (2nd line of warriors) to follow him to a head hunting war. His father Chowpha Wanglin the III and his mother Khonsen Wangcha-Dong advised him not to go for the war. He wouldn’t listen to them. So his elder brother gave him his single barrel 12 bore gun for his protection and advised him not to take unnecessary risk. He was highly productive and built a formidable team of warriors. He was able to create collaboration with the youths and instilled in them the desire to fight for hunting heads. The group was however persuaded by the ‘Nok-Pangmi-Ahang Lochan’, not to proceed to the front line and to return home.

To Ang Wangnyum it sounded practical as on that fateful day, a warrior, late Jampee Khetey was injured and was returning to the village for medication. The Kaimai, Chasa, Longo, Tupi,  Noksa and Paniduria continued to guard the front line.

During World War II, two platoons of US GI camped at a place known as ‘Ho-Dong-Ho’ (North -east of Borduria village) and Ang Wangnyum was a regular visitor to their camp. They trained him to shoot a Tommy gun and light machine gun. He would act as interpreter to the US Army. When the war ended, a US Army officer was impressed by the leadership of Ang Wangnyum and wanted to take him to America. The officer approached Chowpha Wanglin III for permission to take Ang Wangnyum to the USA for education.  Ang Wanglin III refused to part with him as he had only two sons. Luck and destiny did not grace him and he landed being employed by the NEFA administration as a VLW, followed by Zamadar in the Tirap Frontier Tract Political Office.