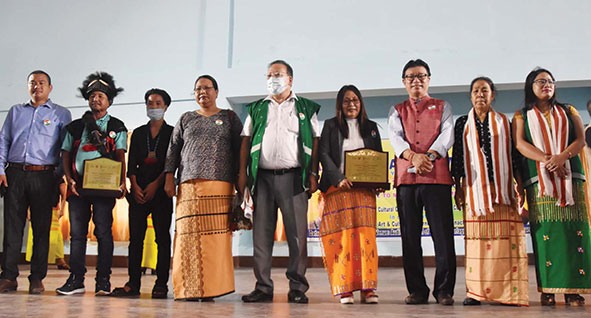 NAHARLAGUN, 18 Sep: Rich tributes were paid to late Matmur Jamoh and late Moje Riba, two revolutionary freedom fighters of the state during a programme to commemorate the 75th year of independence under the banner of ‘Azadi Ka Amrut Mahotsav’ at the MPCC auditorium hall here on Saturday.

During the programme organized by the North East Zone Cultural Centre, Dimapur (NEZCC), in collaboration with the directorate of art & culture, mementos and certificates were presented to the kith and kin of both the freedom fighters as recognition of their supreme sacrifices.

Late Matmur Jamoh, a native of Yagrung village,  with his team of seven members had murdered Noel Williamson, who was the then assistant political officer of Sadiya and Dr Gregorson on 31 March, 1911 along with their entire entourage of sepoys and coolies at Komsing and Pangi village, respectively.

This incident led to the famous Anglo-Abor War of 1911. Eventually, he along with Lomlo Darang and Bapok Jerang were given life imprisonment and sent to Kala Pani at Andaman & Nicobar Island and never returned even after the country achieved independence. Late Jamoh had fought against the slavery policy of the Britishers.

Late Moje Riba had first hoisted the national flag in the state on 15 August, 1947 at Dipa village in Lower Siang district. Born in 1890 (approx.) to late Gomo Riba in Dari village, Moje Riba joined the Indian National Congress (INC) in the 1920s and participated in many freedom movements for which he was jailed in the 1930s (possibly in Sadiya or Pasighat).

In the late 1930s he was appointed as the president of INC for Arunachal Pradesh (then North Eastern Frontier Tract, NEFT). He was the recipient of ‘Tamra Patra’ from the Government of India. He passed away on 22 January, 1980.

Earlier, addressing the programme, state Minister for Cultural Affairs Taba Tedir said, “We are very much inspired by these two freedom fighters. Their sacrifices inspire us to work hard and serve our countrymen in every possible way.”

He further stated that there are many unsung heroes of the freedom struggle in Arunachal and that their names needed to be brought to light, which would be done under various programmes of ‘Azadika Amrut Mahotsav.’