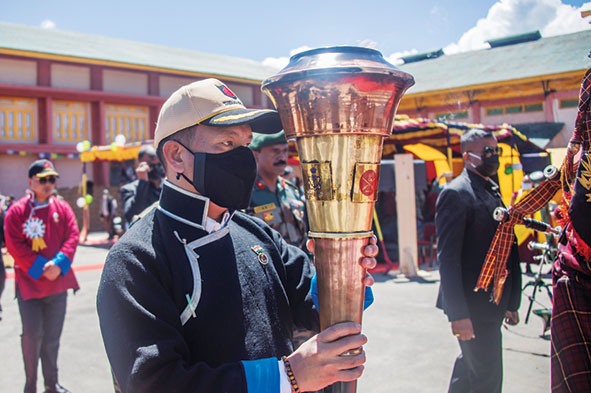 The ‘victory flame’ that symbolizes India’s victory over Pakistan in 1971 reached Tawang on Monday travelling all the way from New Delhi last year.

The celebration of 50 years of the victory – Swarnim Vijay Varsh- was flagged off by Prime Minister Narendra Modi from the National War Memorial in New Delhi on 16 December, 2020.

Speaking on the occasion, Khandu said, “The Victory Flame lit by the prime minister has reignited the sense of unity across the country while remembering the sacrifices of our brave soldiers in the 1971 war.”

He paid rich tributes to Field Marshal Sham Maneckshaw under whose command the Indian armed forces registered victory within a span of two weeks.

“The 1971 Indo-Pak war witnessed one of the world’s largest victories in which at least 93,000 Pakistani soldiers surrendered to the Indian forces. This is a tribute to the brave Indian soldiers who fought the war and those who sacrificed their lives,” he said.

Khandu also hailed the 1971 War for bringing together the three arms of the Indian armed forces – air force, army and navy – in supreme coordination to achieve victory over enemy forces.

He said Arunachal Pradesh that shares international borders with three countries is proud to be a part of the celebrations and humbled to pay respects to the 1971 war heroes by hosting the Swarnim Vijay Mashaal.

The chief minister asserted that under Modi’s leadership the defence sector has been given top priority. He said the Indian Army is well equipped while the country today is developing indigenous armoury under the ‘Make in India’ policy.

“We are a peace loving country. We do not want war in any circumstances. But if it comes, we are ready,” Khandu said.

Congratulating the Indian Army, he said Tawang has been lucky to have a long association with it. He urged all to maintain the cordial relationship and bonhomie between the forces and civilians.

“We may be a state with extreme diversities but when it comes to patriotism, Arunachalees cannot be questioned nor compared. Our people are with the Indian Army whether in peace or in war,” Khandu said.

Four victory flames lit from the eternal flame at National War Memorial are being carried throughout the cities and villages across the nation, including the villages of Param Vir Chakra and MahaVir Chakra awardees of the 1971 War.

The victory flame has been sent to four cardinal directions of the country and will converge back at New Delhi in December 2021. (CM’s PR cell)